These are the top environmental blogs that I read in relation to my interest in endangered and extinct animals.

Published by the Yale School of Forestry and Environmental Studies, this is an up to the minute site focusing on environmental research, news and discoveries.

Focusing on increasing global awareness of the plight of the world's wildlife and threats to biodiversity, this is a very interesting, if slightly political, site.

Run by Discovery Communications, who also run the Discovery Channel, this is a very newsy, scientific site dealing with environmental concerns from the smallest microorganism to the largest oil rig.

I had to include this one, although it's aimed at younger persons, because my daughter loves it and I have to admit I really enjoy reading it as well.  It covers most basic animal facts and goes into minor scientific detail.

For up to the minute news on endangered animals in any part of the world, this is a very good first stop.

I put this list together based on my personal liking for these blogs, not on site traffic, website design or anything other than plain, simple reporting and facts on endangered animals.  I hope you enjoy them as much as I do.

I would love to hear of any blogs you may know of that are worthy of this list.

The NAFTA Panel has been invoked to investigate Canada's potential violation of Wildlife Law.

The Center for Biological Diversity, an US conservation group, has filed a challenge over Canada's failure in its duty of care towards the protection of polar bears under the Species At Risk Act.  The challenge was filed with the NAFTA (North American Free Trade Agreement) established Commission for Environmental Cooperation.  This commission was created to monitor the signed countries and their compliance with their own environmental law.

Canada chose to give polar bears the status "species of special concern"  which gives them no protection, whereas a status of "threatened" or "endangered" would have given polar bears legal protection.

“Canada is willfully ignoring the deep trouble that polar bears are already in and the likely extinction they face without rapid cuts in greenhouse emissions,” said Kassie Siegel, director of the Center for Biological Diversity’s Climate Law Institute, which successfully petitioned and sued to protect polar bears under the U.S. Endangered Species Act. “Time is running out for the world’s polar bears. They deserve real protection.”  (quoted from the press release from the Center for Biological Diversity).

Scientists state that, without help, more than two-thirds of all polar bears will be gone by 2050 and the rest could be extinct by the end of the century.

Hopefully the challenge will help Canada to see that polar bears are definitely endangered and should be afforded all the protection legislation can provide.  It would be a monumental shame to lose these beautiful animals from the world. 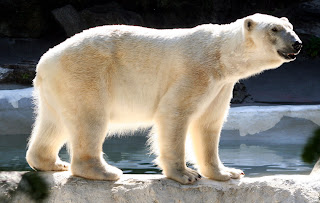 Posted by Catherine R Booth at 7:24 PM No comments:

Bushwalkers stumbled across a giant carnivorous snail -Powelliphanta hochstetteri hochstetteri - that was not only a rare species, but also albino.

They managed to photograph it. The photograph and full details can be found at stuff.co.nz

Posted by Catherine R Booth at 6:21 PM No comments:

All seven species of the sea turtle are listed as endangered under the Endangered Species Act.  David McGuire writes about the unusual voyages being taken by these turtles into temperate waters in Monterey Bay and the Gulf of the Fallarones National Marine Sanctuary waters.

David McGuire presents a fascinating insight into the lives and perils of these endangered sea turtles.  He explains why they're endangered, and peppers his article with interesting facts. 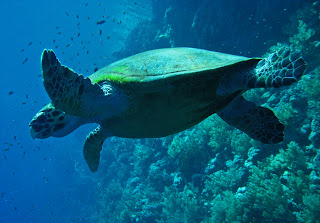 Posted by Catherine R Booth at 5:38 PM No comments:

The vaquita, more commonly known as the Gulf of California Harbor porpoise, is critically endangered.  The use by Mexican fishermen of gillnets is one of the primary concerns in preventing the accidental killing of these beautiful, playful sea mammals.  Approximately 150 to 560 of vaquitas exist today, and are predicted to become extinct by 2015 if their critically endangered status is not reversed.

The Mexican government is being petitioned to ban the use of gillnets by fishermen in order to remove one of the worst causes of the harbor porpoise's impending extinction.  To read more and sign the petition, visit ForceChange. 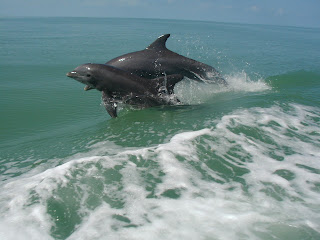 Posted by Catherine R Booth at 4:29 PM No comments:

Facts on the Asian Elephant

Asian elephants, or elephas maximus, live in south east Asian countries and India. Most live in the forests, but some also live on grassland plains and in the mountains.

The Asian elephant is smaller than the African elephant, with much smaller ears and tusks. This is probably because they live mostly in the forest and don’t need large ears to cool themselves with, and large tusks would get in the way among the trees.

Asian elephants have a high forehead, possibly used to transmit subdural vibrationary sounds. Their ears are said to be shaped like India.. The eyes are a bit bigger than a human’s, and they have good eyesight, being able to see a moving object in daylight at up to 150 feet or 45 metres away.
Asian elephants have been used as a working animal in south east Asia and India for thousands of years. 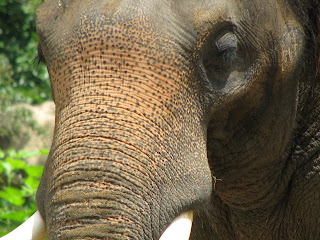 Are Asian Elephants Endangered?
While elephants are not registered as endangered, because their population dropped so alarmingly quickly due to poaching (populations dropped about 50% between 1979 and 1989 due to poaching, until the ivory trade ban in 1989). Elephant populations only increase by about 6% a year, and only if the population remains undisturbed.

Elephants have no natural predators, however, their habitat is under threat from increased human development, farming and logging. Poachers still operate in some areas and decimate populations very quickly. Half a million elephants have been killed in the past 10 years alone. Ivory from their tusks is worth its weight in gold, unfortunately.

Talks are underway to approach a compromise to prevent poaching. Legal elephant hunters could be limited to killing only male elephants with tusks above a certain size, allowing younger males to service the unharmed females and continue increasing elephant populations. Consideration is also being given to removing restrictions on the ivory trade and allowing villages to farm elephants in order to harvest their tusks.

Farming elephants could also bring the tourist trade to remote villages to boost their financial economy. They could provide elephant spotting tours, and elephant rides into the nearby forests and grasslands, to view the other native wildlife and natural beauty spots.

Put simply, human nature being what it is, we have to give the villagers who dwell in elephant country a reason to value and protect these wonderful beasts of the earth.
Posted by Catherine R Booth at 7:20 PM No comments:

The Tasmanian Tiger or Thylacine

The largest known carnivorous marsupial, the Tasmanian Tiger is native to Australia and New Guinea. It is also called the Thylacine, or Tasmanian Wolf, and is from the genus Thylacinus.
The Tasmanian Tiger became extinct on mainland Australia thousands of years before European settlement.

However, the Thylacine continued to exist in Tasmania, an island state of Australia, until about 1936.
There are various theories on why the Tasmanian Tiger became extinct. Among these are bounty hunters, disease, and the destruction of its natural habitat.

Although it is officially listed as extinct, there are still reported sightings reported to this day of the Tasmanian Tiger. No sightings have been confirmed by empirical evidence, however.

At present there are attempts at cloning the Tasmanian Tiger happening in scientific research. 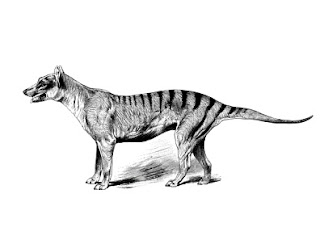 Posted by Catherine R Booth at 7:17 PM No comments:

Cranes Could Be Extinct By the End of this Century

There are 15 species of cranes, and all of them could be extinct by the end of this century, according to Dutch scientist Dr Joost Van der Ven.

Dr Joost Van der Ven says that lack of breeding and wintering are the main concerns for cranes.

There are 25 000 cranes worldwide, 10 000 of which winter in India.  The largest population of cranes live in Australia.

The Siberian crane, which wintered in India and Iran, has gone extinct due to being hunted while on their migration route.

Read more at The Times of India. 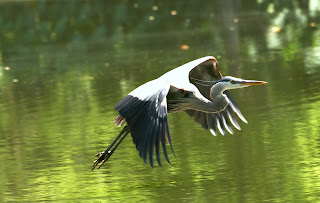 Posted by Catherine R Booth at 5:14 PM No comments:

Indonesian Orangutan On the Brink of Extinction

Read more at The Guardian 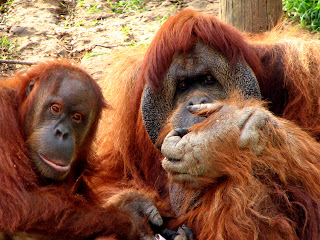 Posted by Catherine R Booth at 3:40 PM No comments:

Charlene Hewatt, known to endangered animal circles and poachers as "Rhino Girl", spoke out at the Rotary Club of Hunyani about her fundraising efforts overseas.

Charlene Hewatt is the chief executive of Environment Africa and works tirelessly on the behalf of endangered African animals.

She stated that "extinction is forever" and explained how she endured weather extremes in her travels to raise funds and awareness for the rhinoceros, rapidly approaching extinction in Zimbabwe. 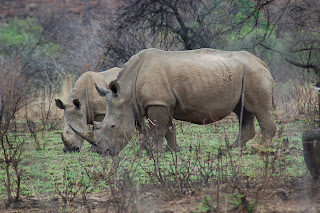 Posted by Catherine R Booth at 2:05 PM No comments:

Isdore Guvamombe writes poignantly of the drought affecting the endangered elephants of the Hwange National Park. This park holds the largest concentration of elephants in any national park of the world.  Each elephant requires 225 litres a day of water to survive, but the drought is making this impossible to obtain for many elephants. 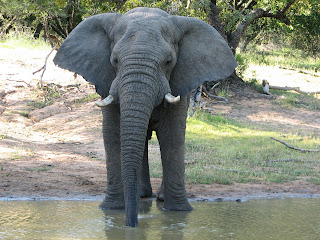 Posted by Catherine R Booth at 9:28 PM No comments: